The history, variety, delights, and difficulties of theatrical prints and printed ephemera were the focus of APAC’s study day ‘Theatrical Prints: Technology, Audience, and Resources’ on 4 March 2013. Hosted by V&A Theatre & Performance at Blythe House, the event was funded by a Subject Specialist Network grant from Arts Council England.

In his morning session, Martin Andrews, Deputy Director of the Centre for Ephemera Studies at the University of Reading, gave an extensive and intensive overview of printing techniques. In the afternoon, five curators and a print dealer gave presentations about the prints and printed ephemera they work with. Twenty-six people, including the speakers, took part.

While performing arts professionals might know a great deal about the subject matter of a print, they are less likely to be able to identify the process used to produce it. Martin Andrews brought his collection of tools, blocks, and prints to hand around to the group as he explained the three principal printing methods:

In his discussion of relief, Andrews stressed it was important to make the distinction between a wood cut and a wood engraving. Wood engraving was the most wide-spread printing technique of the 19th century and allowed much finer, more detailed illustration than seen in the earlier wood cuts. In outlining the history of wood engraving, Andrews explained that the earliest practitioners, such as Thomas Bewick (1753-1828), were both artist and engraver, but as the 19th century progressed, the two roles were separated. Engraving became a trade, and in some companies, printing blocks were produced in a production-line process.

Methods of duplicating plates were invented because the original wooden blocks wore out. Andrews said that the electrotype process was so accurate it is impossible to detect whether a print had been made from an electrotype copy or the original wood engraving. He handed around an example of a ‘flong’, a large sheet of papier maché with the reverse impression of a typeset page pressed into it, from which the page could be printed.

Another of his interesting plates was an example of intaglio. The large sheet of copper contained an elaborate advertisement for fireworks, which Andrews said would have taken over a week to produce. He pointed out where the engraver had made a spelling mistake in the heading and had had to hammer it out. In his discussion of intaglio, Andrews surveyed copper engraving, steel engraving, etching, mezzotints, aquatints, and rotogravure.

Actor-playwright Aloys Senefelder (1771-1834) invented lithography in 1796 as an inexpensive method of publishing his plays. Originally, stone was used as the printing block, and the artist was able to draw directly onto the stone with his usual tools of crayon, chalk, or brush. A complicated method to explain without demonstrating, lithography operates on the principle that oil and water do not mix. Lithography put an end to the engraving trade and became the standard means of commercial printing in the 20th century – and into the 21st.

An engaging speaker with great enthusiasm for and knowledge of his subject, Andrews runs print-identification short courses at the University of Reading. In these, he goes into depth about techniques and printmakers, and demonstrates the different processes on the Department of Typography’s presses. He was clearly pained at not having the chance in two hours to impart all the information he wanted his APAC audience to know.

Julia Anne Lambert of the Bodleian Library opened the afternoon session with a presentation about the ProQuest project to digitise the John Johnson Collection. Focused on the 19th-century material in the collection, the project had digitised performance ephemera and images of actors, actresses, and entertainers. The software allows OCR of text on the digital image, thus providing the user with more search results than is possible through the catalogue record, as detailed as it is. (The OCR works on letterpress but not engraved text.) Users can also search by format, such as for ephemera ‘with gold printing’, and by iconography, such as for items illustrated with horses.

Tracing the development of playbills, programmes, and posters, Cathy Haill presented a great variety of examples from the V&A’s theatre archive, reading out her favourites in the appropriate dramatic tone. Actor Edmund Kean (1787-1833) refused to have pictures on his playbills and instead presented his public with long essays about his current production. Haill’s sample of a text-heavy Kean playbill, which would have been printed daily, aptly demonstrated why the programme came about. With the programme carrying the text, the poster, which arose around the same time, could focus on images to draw the public into the theatre.

Explore our Members' Programmes and Posters

Actor David Garrick (1717-1779) started the trend for theatrical prints, Sheila O’Connell of the British Museum explained in her presentation. Useful to Garrick as a means of promotion and to printmakers as a means of income, prints were copies of paintings of Garrick in character or as himself. New prints continued to be produced decades after the original painting. O’Connell traced the history of several paintings and their prints, including David Garrick Between Comedy and Tragedy (1761) by Reynolds. O’Connell showed how Garrick’s pose with the two muses was so well known that it was quoted in other works, such as in Punch cartoons.

Marcus Risdell of the Garrick Club presented several cautionary case studies, illustrating the differences between the painting of a theatrical scene and subsequent prints. Risdell noted the actors’ differing arm positions in Zoffany’s painting David Garrick and Mrs. Pritchard in ‘Macbeth’ (1768) and a print of the same title. The difference could point to a missing painting, Risdell said, rather than a misrepresentation of the known picture. The actors’ poses could also illustrate different lines from the play. In another example, Risdell traced how the face of actor Alexander Pope (1762-1835) was lifted from a painting of The Gamester and used in a print of Cymbeline – thus depicting Pope in a role he never actually played. Risdell warned of other ‘fictitious’ performances lurking in prints.

Beverley Cook of the Museum of London gave an overview of the museum’s Jonathan King Collection. King (1836-1912) was a London stationer whose workshop produced a wide selection of handmade Christmas and Valentine’s cards, as well as toy theatres, theatrical prints, and tinsel prints. These last were pictures of actors and actresses in character to which the buyer would glue adornments. Made of foil, fabric, and metal, the adornments were in the shape of items of the character’s clothing, the costume’s decorative elements, and weapons. These were also made in King’s workshop, and sample sheets preserved at the museum showed the buyers which tiny items to purchase to make up their character. 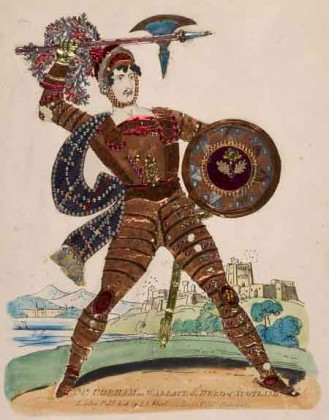 Print dealer and dance researcher Keith Cavers brought the afternoon session to a close with a paper on John Brandard (1812-1863), a well-known English illustrator of sheet music. Cavers believed that Brandard drew straight onto the lithographic stone without preparatory sketches because no Brandard drawings have yet come to light. Nineteenth-century sheet music is never dated, and Cavers explained how to use the printers’ addresses and other clues to determine a date or date range. He brought in one of Brandard’s proof prints and a selection of sheet music with Brandard’s fine drawings on their covers.

In the Q&A session, participants were most keen for further sources of information. Andrews recommended the Printing Historical Society as the best source on printing. Addresses and other information about publishers can be found in the British Book Trade Index, compiled by the University of Birmingham, and Ian Maxted’s Exeter Working Papers in British Book Trade History, both available online.

Presentations at the Study Day

Chris Jones is an Individual Member and APAC Website Officer