The Association of Performing Arts Collections was founded in 1979 as the Theatre Information Group London, an informal network of librarians who met to exchange information about theatre resources.

In 1985, the group became the UK National Centre of SIBMAS, the International Association of Libraries, Museums, Archives, and Documentation Centres of the Performing Arts.

In May 1989, at its 10th anniversary, the group changed its name to the Theatre Information Group (TIG) and by the end of the year, had restructured to become a formal organisation with an executive committee, with the aim of broadening membership and involvement, particularly outside London. In 2005, the group became the UK’s Subject Specialist Network (SSN) for performing arts

In 2018, APAC became a registered charity and an Affiliate Group of the Archives & Records Association of the UK and Ireland (ARA), with 95 members.

Read more about our history 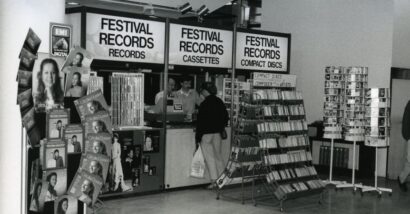 To mark our 40th anniversary in 2019, we processed and catalogued APAC’s own archive, located at the V&A Theatre and Performance Archive. Past Executive Committee  papers from 1988 onwards were sorted into series reflecting APAC’s administration and activities.

Former committee members and the wider membership  filled gaps in the archive and contributed some additional materials. Minutes and other documents were printed from the APAC listserv and the Executive Committee’s shared drive to bring the archive’s contents up to 2019. The catalogue is available on Archives Hub and on the V&A’s Search the Archives.