Prompt books are some of our most important theatrical ephemera. These annotated scripts act as ‘road maps’ for stage productions, often providing priceless clues to how a stage production looked or sounded, and frequently stuffed with details, diagrams, lists and notes unavailable elsewhere. They may record script changes, cuts, and directions about how an actor entered, moved, delivered a line or left the stage, as well as technical directions relating to lighting and sound.

Historical formats and what to record

Over time the formats of prompt copies have changed, evolving from manuscript and printed copies to the loose-leaf, word-processed prompt books of the 20th century and beyond. Prompt books dating from before the 18th century are very rare survivals and may have comparatively little annotation, such as the marked-up text of Handel’s opera Radamisto (1720), one of the earliest prompts in the V&A.

By the 18th century the practice of interleaving printed texts with blank leaves gave the prompter a clean page, facing the dramatic text, on which to scribble annotations parallel to the relevant line or stage direction. The amount of annotation naturally varies from text to text, prompter to prompter, but typical markings include entrances and exits (sometimes referring to the grooves on which contemporary scenery ran), props required – with the occasional nugget about how or where such an object was used in stage business – music, cuts on the text, and lines reassigned to different characters. The cataloguer should document the presence of all these. It can be useful to give researchers an idea of the extent of the annotation, which ranges from copious to scanty to half-finished. Texts may be partially marked up, with the notes petering out part way through.

The markings themselves may be encoded as initially puzzling squiggles but these do not necessarily amount to a common shorthand among prompters. As an introduction to the infinite variables suggested by symbols such as a circle, which may be dotted, otherwise decorated, or enclose a letter of  the alphabet, Edward Langhans provides a useful introduction for cataloguers keen to attempt cracking the cipher ( 1).

Prior to the invention of the typewriter, non printed prompt books had of course to be fully written out by hand, and these manuscripts, bound or unbound, are sometimes transcribed in two or more colours of ink, with the stage directions and other information extraneous to the text in a contrasting colour, usually red. In addition in both printed and manuscript texts there may be pencilled notes in the margins surrounding the text. Should these appear to be in more than one hand, this is worth recording.

Prompts may be disbound published copies of the text tipped into an exercise book, effectively creating the same facing blank leaves for the prompter/stage manager to work on. Frustratingly the edition used may not be obvious, as title page information may have been discarded.

At the point of cataloguing, modern prompt books should be assessed for any issues arising from Data Protection legislation. The prompt can be a convenient place to squirrel away personal details such as contact information for cast and crew. Some managements may file show reports in a production’s prompt book. These need to be scrutinised carefully for any comment that might be perceived as derogatory, and potential closure periods considered for this element of the manuscript. Material removed for Data Protection reasons should merit the insertion of an acid-free leaf recording this decision.

Records for modern prompts need to document essentially the same categories of information as those for their historic counterparts: actors’ cues, calls, moves, cuts, re-writes, props and/or scenery lists, scene changes, and technical cues for lighting and sound effects. Cataloguers should record (if readily identifiable) in authority form the author, venue and/or company, and the format of each prompt, as well as conventional bibliographical data such as date and extent, if it is practical to ascertain this. The complex foliation of prompt books, in which leaves may have been excised or added, which may or may not be numbered at all, sometimes  requires  the one-size-fits-all option of ‘1 v. (various foliations)’. Identifying the prompter or Deputy Stage Manager (DSM) who runs ‘the book’ can be harder, unless this information is helpfully recorded on the object itself, but where this is known, these unsung backstage heroes should be mentioned in the record.

As 18th century copies are typically bound printed volumes or manuscripts, provided the text block is stable, an item may sit happily in a phase box. This is a four-flap container constructed from rigid card which may be fastened with button-ties.

Towards the end of the 19th century, the advent of the typewriter provided theatre managements with a convenient way of mass-producing scripts. The paper in early typescripts is often flimsy, acidic and liable to tear unless the volumes are robustly housed and carefully handled. (V&A users are not issued with gloves but may be asked to wash their hands before consulting fragile scripts.)

Anyone with a substantial collection of 20th/21st century prompt books is probably qualified to write a history of the ring binder. At the V&A we routinely remove the contents of ring-bound prompts, whether card or plastic, and re-house the punched leaves in lignin-free conservation ring-binder boxes. Arguably this diminishes the theatrical ‘look’ of the documents but this small sacrifice in character is considered a reasonable compromise to prevent contact with plastic covers that can attract condensation and mould, or acidic card that will eventually become brittle and may be coloured with unstable dye. This housing gives the structure of these retired working documents a degree of stability and helps prevent further deterioration caused by light and dust.

Owing to stage managers’ habit of jotting down notes on any convenient surface, notes that may be of future interest to researchers may sometimes be scribbled on the inner covers of a folder. In this case we either photocopy them onto acid-free paper or, if the information is considered important enough, preserve the entire binder in a box with, but not touching, the prompt.

Prompt books work hard for their living and their condition will reflect this if they have been used over a long run. At the V&A any fragile prompt receives conservative treatment ensuring that it is stable for handling or display. The lived-in look is part of the history of the object and no attempt is made to glamorise prompts as anything other than the working documents they once were.

Dr Beverley Hart is librarian of the Theatre and Performance Collections at the V&A and a past Chair of APAC. 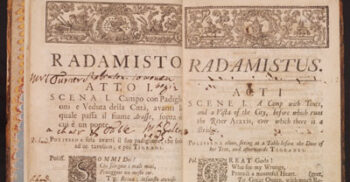 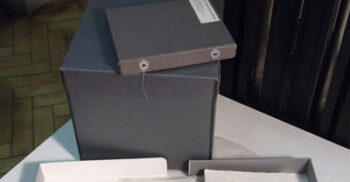 Documenting and storing Promptbooks
How to
See all resources